We wandered around Birmingham soaking up the changes since we were last there. The weather was warm and the areas around the International Conference Centre and Gas Street basin were buzzing with people walking over the connecting bridges and dining canalside.

The central area, Paradise, is being redeveloped, large pieces of brutalist architecture are being bulldozed in an eleven year plan. New Street Station gleams like a shiny ship on the edge of the chaos, and new tram tracks are being laid.

While Dugald went to London for some meetings, I spent a happy day using the laundrette facilities on the wharf, restocking and exploring further. 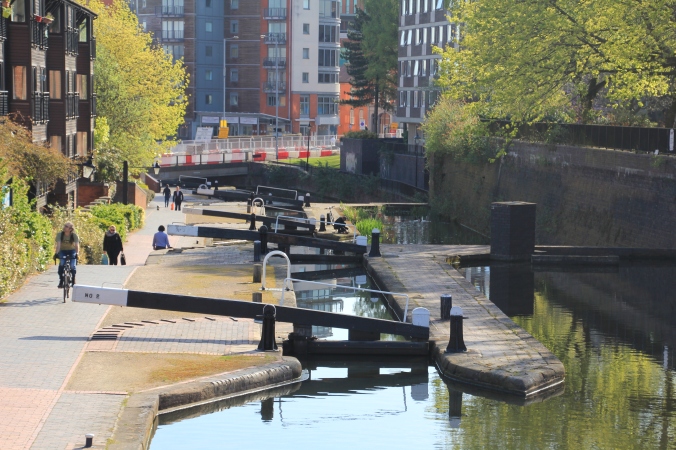 The next day we had a clear run out of the centre, down the Farmers Bridge flight.

I met a cheerful boater at the top of the flight who knew Brentford well.

It felt much tighter and intimate here,

we could see people working in offices right on the edge of the locks,

and others in dark corners with no work and no home. 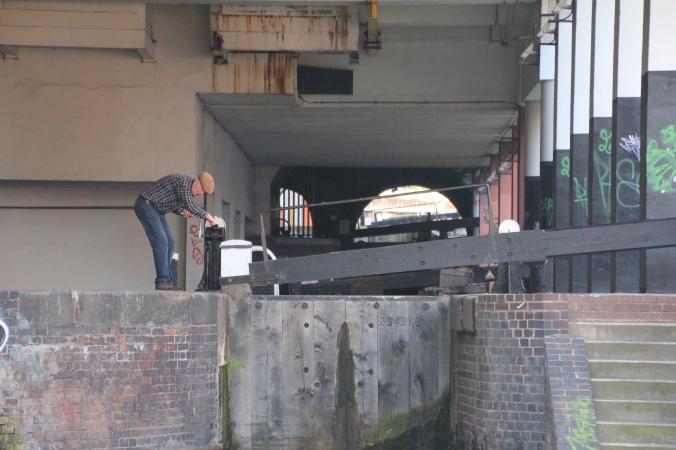 The old structure of the canal mixed up with the new.

The lock keeper turned up near the bottom of the flight in time to watch me make a complete hash of going into the next lock. Every previous entry that day had been perfect!

We were entertained by a family of geese marching past us on one of the locks. We don’t usually get as close to the goslings when they are out of the water.

At Aston Junction we joined the Grand Union, although at this stage it remains a narrow canal,

then on through the Ashted lock flight which has a very tight tunnel immediately after the first lock.

There was demolition and development all around. 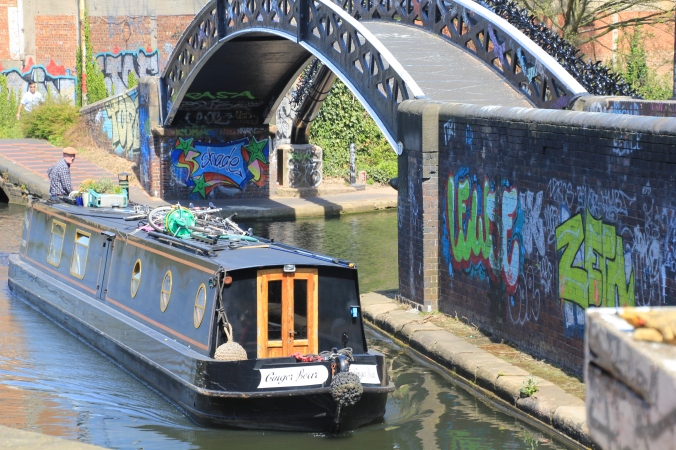 We are used to seeing graffiti adjacent to the canal,the decoration at the beginning of the Camp Hill flight is in a different league and quite spectacular.

Working our way through Solihull, we gradually left the suburbs and later moored in the countryside beyond the intriguingly named village of Catherine de Barnes. 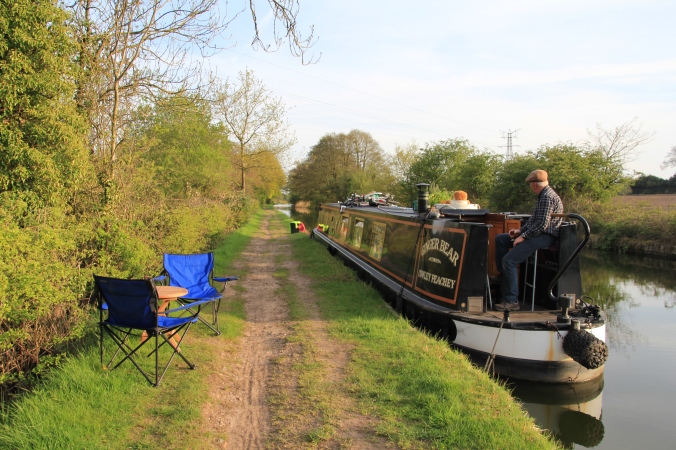 We set up our table and chairs beside the towpath, it was the first warm evening of our trip.

We had been through twenty five locks on our way out of Birmingham, and only seen one other boat on the move.

Back on the main Grand Union, we were working big locks again. 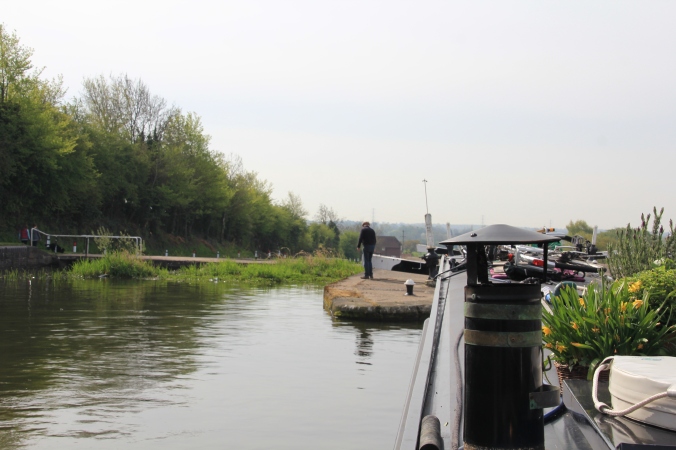 First the Knowle flight of six locks to be followed by our old friend the Hatton flight of twenty one – another busy day ahead! 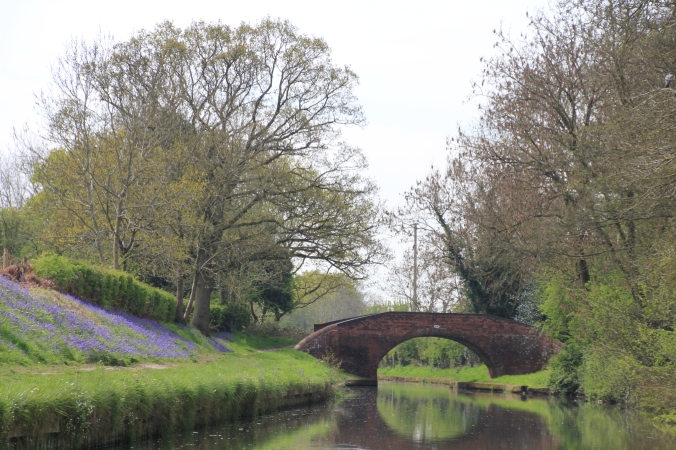 Fortunately the weather was good, and we relaxed between Knowle and Hatton enjoying the view. The banks were covered in bluebells,

And we waved at the turning to the Stratford canal, reminded of our trip last year, and passed the second boat of the day.

We paired up with nb Amadeus going down the Hatton flight. Half way down the flight there was an ‘incident’ with a cyclist. The ‘elderly’ father on Amadeus (misuse of the word – he was only 71) and a speeding cyclist met on the towpath under a bridge, the cyclist and his bike ended up in the canal. There was much yelling and abuse from the cyclist, and a CRT volunteer turned up to help retrieve the bike. A little later Amadeus had a problem with her propeller, and we carried on without her. Further down the locks we were interviewed by two bike riding policemen who had been called by the biker, he had accused the father of pushing him into the canal. Near the bottom of the flight the volunteer lock keeper caught up with us and said “Oh, you are the naughtly boat”, he thought that we had pushed the cyclist in!

I said it was nothing to do with us, and hadn’t seen exactly what had happened. Later, I saw the cyclist (who apparently was also a boater) coming down the towpath, I hoped that the he would realise that too. I didn’t fancy being pushed into the canal by an angry cyclist.

There was nowhere to moor at the bottom of the flight, so we stopped just beyond Cape locks, both exhausted having done another 28 (big) locks, and more to look forward to the next day. We decided to award ourselves a treat, and staggered into Warwick for a rather good meal at a small italian. 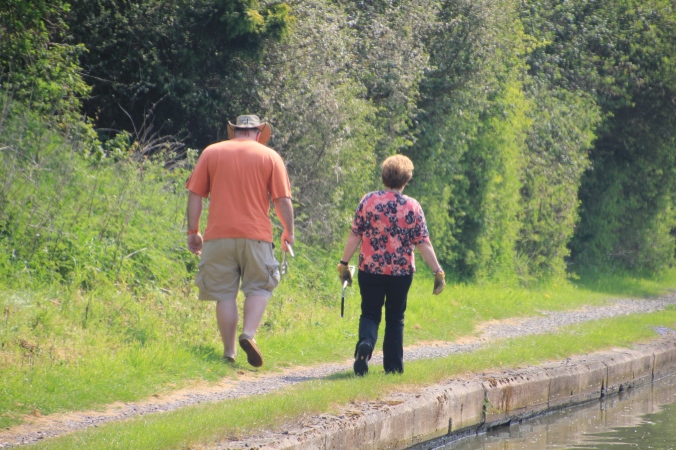 We were lucky to meet nb Albert Ross at the bottom of the Fosse locks. Her skipper was winding the locks, and he was very good at it. I think he had been working out at the gym. We stayed with them until lunchtime, when they stopped at one of the pubs in Itchington. It was the first hot weekend day, and the pubs were packed. I heard grumbles from boaters on the locks about sixty people waiting for drinks and chaos in the pubs. Sad thirsty boaters.

On through the Stockton locks, a brief spell of thunder and hail, and then a delightful and unexpected meeting with two of my old patients as we passed between locks.

We carried on through the Calcutt flight, stopping briefly at the top to show two young men in a hire boat how to work the paddles and go through a lock. I hope they got the hang of it eventually. 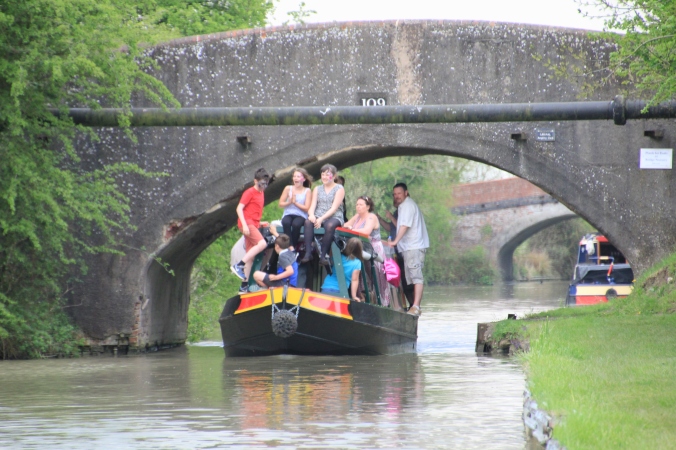 We left the Grand Union and started down the Oxford canal. This canal is very popular and there are always lots of hire boats. We met our first one at the first bridge! 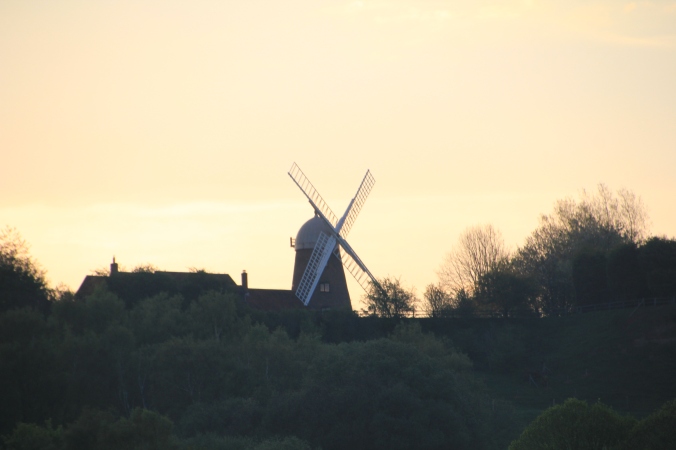 We moored in the countryside near Napton – another long day. We were having to push ourselves a bit as we had arranged to meet my sister Bids and her husband Nick a couple of days later in Banbury, and we still had some way to go.

Napton flight next and a busier canal, we set off early the next morning to try to get ahead of the crowd. Back in narrow locks there was no prospect of sharing. 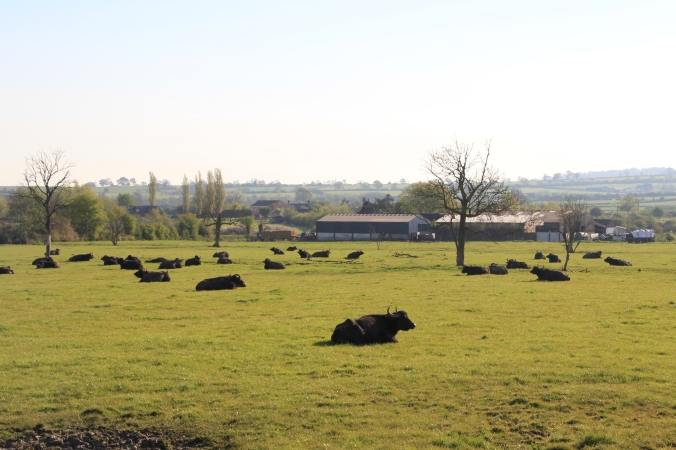 It was a beautiful morning, and the water buffalo were lying peacefully in their field.

The lock arms were very decorative having been yarn bombed.

The canal then winds through the countryside for a long time.

We passed a boat that seems to have found a way around the need to have a licence, it has moored on the field rather than in the canal.

While I was admiring the very yellow rape fields, Dugald suddenly said “naked man ahead”. I wasn’t sure I had heard him correctly, but there he was swinging along, wearing only a rucksack and wellies, he waved cheerfully from the towpath as we went past.I was quite pleased I hadn’t had to squeeze past him on the narrow towpath, and wondered whether he would stop and chat to people on the nearby Napton flight.

We now began our descent towards London down the Claydon flight. Stopping at the very friendly Copredy Marina for fuel, it was very windy and Dugald struggled to get out again without playing bumping the moored boats, but all was well.

We were now close enough to Banbury to relax, we would make our rendezvous the next morning.

Another beautiful sunny day. We moored in the centre of Banbury, and Dugald collected Bids and Nick from the station, while I got lost in an enormous Morrisons. They had to send a search party out for me.

Nick quickly got the hang of manoeuvring the boat, and enjoyed taking her through what is supposed to be the deepest narrow lock in the country.

Biddy and I made a great team at the locks, it was really good to have some help again

Mooring at Aynho in the same spot as last year, we were entertained by a family of geese in the field opposite. 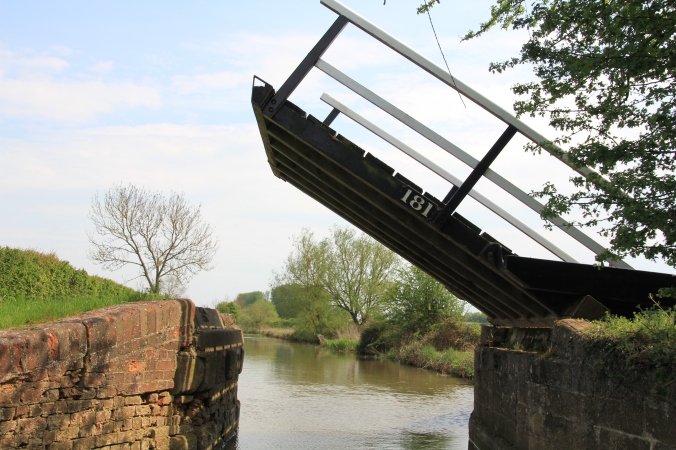 Back in lift bridge territory, the Mill lift bridge seemed to have a life of its own. Both Biddy and I had to sit on the arms to keep it up long enough for the boat to go through. I am not sure how a single hander would manage. 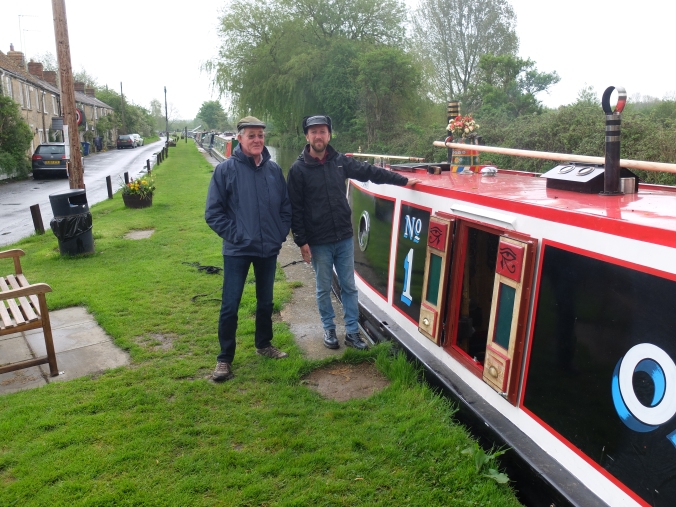 The weather wasn’t great, and we stopped for the night in the pretty village of Thrupp. Dugald and Nick were excited to find an enthusiast on nb Osiris who had the engine from one of the Queen Mary’s lifeboats – and was very proud of it. It made a lovely deep ump-ump-ump noise.

It rained heavily overnight, and we set off again through more bridges and locks. We decided to go through Dukes Cut onto the Thames and as we had a bit of spare time to go up the Thames a bit before turning round and dropping Bids and Nick in Oxford.

Coming back down the river, the flow was quite fast,

and we found a yellow board advising stream increasing at Kings Lock. On to Godstow Lock, the last one before Oxford, and we found moored boats by the lock, and a red board. A red board indicates the the river is becoming dangerous to travel on, and we had to stop. 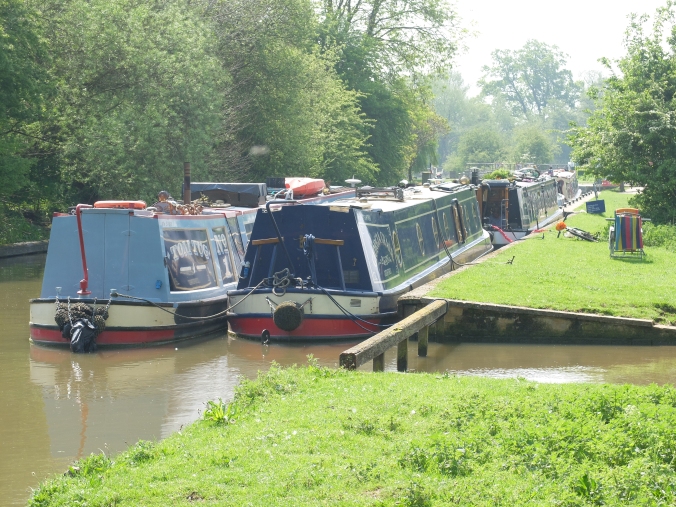 We joined the queue and moored on the bank. A change of plan – following lunch at the nearby Trout Inn, Bids and Nick took a taxi into Oxford, and we went back to the boat hoping we wouldn’t be stuck at the lock for too long.