I am writing this as we cruise very slowly down the Kennet and Avon with summer slipping away. Our pace is in marked contrast to our recent trip to York and back which felt a bit like a yomp. I demanded a slower pace. As I have failed so far to record the second half of our York trip I think it now becomes history rather than a blog – my assumption being that a blog is reasonably contemporary.

To keep the history brief Ginger Bear spent a week in York in the tender care of York Marina so that if the river levels changed, she would go up and down with them. Patrick and Elizabeth Walker came from Northallerton and we went to the rather good Blacksmith’s Arms in Naburn for lunch. It was good to see them, and in Elizabeth’s case we had not seen her for 34 years. We can’t afford an interval that long again.

After a manic trip to Somerset over Easter weekend for a 70th birthday lunch we toasted my brother Charlie’s 55th birthday with prosecco as we cruised into York and back before also repairing to the Blacksmith’s Arms.

A tourist’s day in York eventually found us in the National Railway Museum.

Train spotting is not really my thing, so I settled down on a quiet bench to read my Kindle, only to find myself in the middle of a presentation on Japanese bullet trains. I now know much more about them!

We then set off again, retracing out steps. On the way back we followed the Ouse, the Aire and Calder and then the tidal Trent. On a second run they felt less worrying.

We passed Kellingley Colliery, crawling with diggers and earth movers. It was the last deep mine: closed at the end of 2015 it is being redeveloped as an industrial park. Dugald was prompted to look at one of his favourite sites – Gridwatch – and remarked that the dial for coal generated power showed nil. That evening the news recorded that the previous 24 hours had been the first in British generating history with no power being generated from coal. It was moving to see the former giant being taken down.

We followed our river and canal route back until we passed Nottingham. Even at this stage of the spring we saw relatively few boats out on the water – but hundreds penned in marinas. Perhaps we should be thankful. After the Cranfleet Cut we headed for the Trent and Mersey, breaking away from our earlier route.

We paused in Shardlow so that I could reach a meeting from East Midlands Airport. It is a delightful place and still has the atmosphere of an important inland port.

From there we went on to meet Dugald’s brother Hugh and his wife Julie at Willington. Hugh is an obsessive walker so spent more time pacing the towpath than on the boat but they both enjoyed it a lot.  We spent the night at the head of the Coventry Canal. Before we left the two brothers spent some time admiring the ingenious way in which the Trent and Mersey engineers had deprived the Coventry Canal of more than the bare minimum of water.

Again Hugh strode ahead. After passing through beautiful woodlands at Hopwas and the winding hole we had turned Ginger Bear on our first test outing in her in 2007 we arrived at Fazeley Junction. It was a Sunday and somehow I had checked and convinced myself there were trains from Tamworth to Willington. This turned out not to be true so Hugh and Julie had to taxi back to Willington – I owe them apologies. 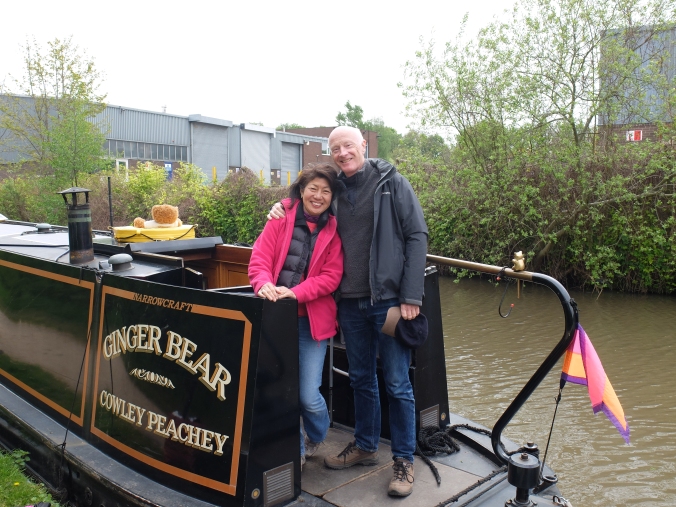 We carried on South past the site of  Boudicca’s last stand and through Nuneaton. I had heard dire stories about Nuneaton and was wary of it, so we continued to Hawkesbury Junction.

It was now May and the weather made some effort to improve. As we went past a huge National Grid distribution centre I was heartened to see water vole resting places. I had learnt about these ‘water vole hotels’ through a piece on Countryfile.

Later in the morning we passed under a completely static M6 and unusually had the satisfaction of going faster than 21st century traffic. We were also now passing more narrowboats every day. The “pensioners” – like us – were coming out of hibernation and setting off for the season. 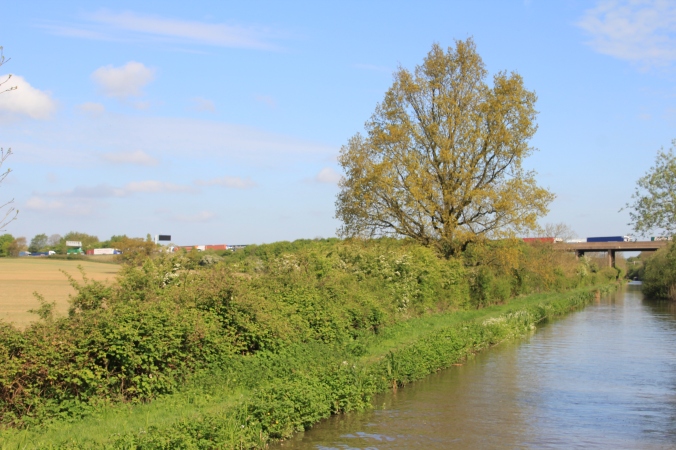 We stopped in Rugby, went into the town and looked at the school for the first time. Returning to the boat by bus we clearly had not learned our lesson from an earlier experience. We set off on the right bus but on the wrong bit of the figure of eight it runs. We both found ourselves in childlike giggles as the bus took us out of town in the wrong direction! We got back to our starting point half an hour later and then set off on the correct loop. We have both seen a lot of suburban Rugby and its surrounds. 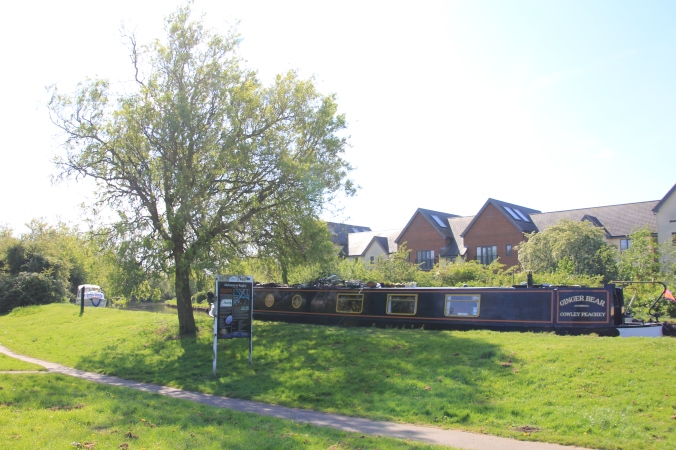 Soon after we were at Napton and on the Oxford Canal again. It is a delight and ambles around in a wonderfully eccentric way. Apparently the designer, James Brindley, believed that the more places it visited the more trade it would pick up, notwithstanding the obvious increase in the time of travel. He may have been wrong but the result is very pleasant.

We missed seeing the naked rambler this year, and he would have been very cold indeed had he been there. We arranged to meet Dugald’s sister Kay and husband George at Fenny Compton Wharf. They arrived by taxi having left their car at Aynho Wharf a little further down the canal. In 2016 they had the very best of the weather on the Llangollen, but this was not repeated in 2017. Overcast, cold and windy there were nevertheless lots of boats about. Later it brightened as we got to Cropredy and went into the marina to refuel and water. As ever the marina manager was immensely cheerful and helpful. What a model of customer service – and that is why we return here whenever we go past.

We moored before Banbury and the motorway. Kay felt deprived of the view of lambs, but I pointed out that you could see them if you peered through the hedge. The next morning Kay and George were up early for a walk to get a proper view of lambs. We left well in time for a late lunch reservation at the Great Western in Aynho. In Aynho Weir Lock there was very little flow from the river which was surprising for the time of year. 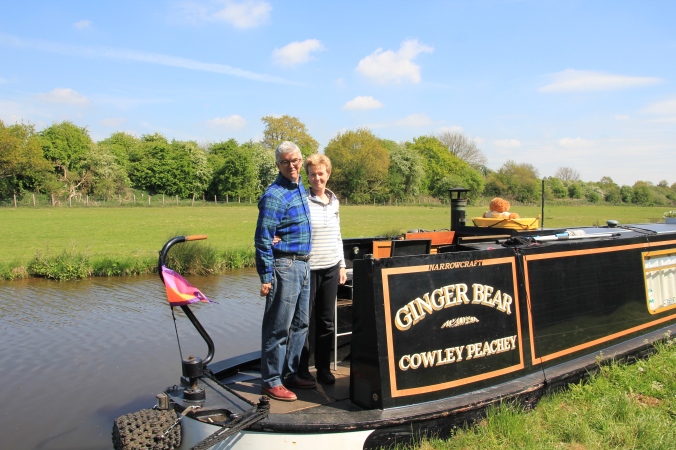 We moored on the long straight before the Great Western . I had promised Kay hundreds of rabbits below the railway embankment and there were none to be seen. But there were lots of house martins in the stable yard of the Great Western where we had a good lunch. When we had waved them goodbye, we got back to a lovely sunny afternoon and hundreds of rabbits. Sorry Kay. 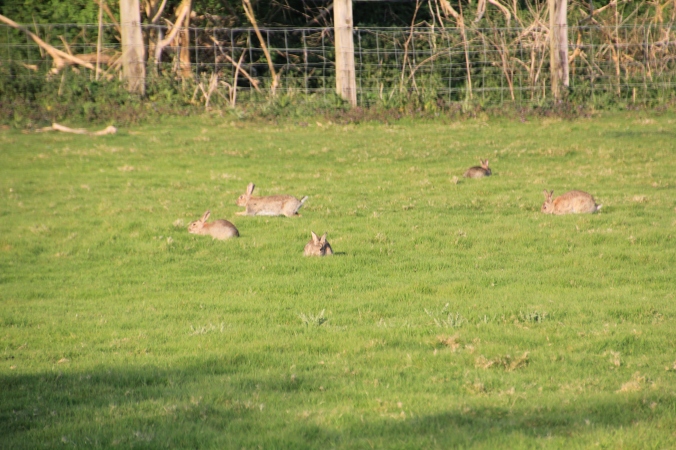 Later we heard that John had completed his first 10k run in 55 minutes and that Macron had won comprehensively in the French presidential election.

Winter returned with a vengeance the next day and we were in full offshore kit. We and others struggled with a recalcitrant lock gate in. I rang CRT who said Nigel was on his way, but later we learned that Nigel had been on his way two weeks before.

We moored on the very tidy moorings at Thrupp and treated ourselves to a good meal at Morse’s favourite, the Boat Inn. 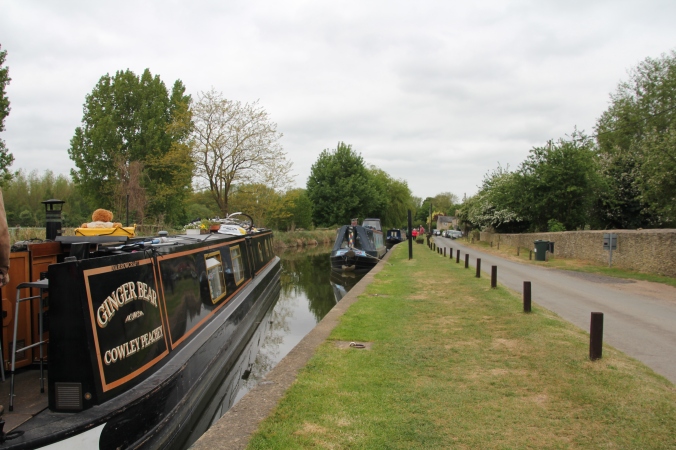 When we came out there was a lively display of belly dancing, Appalachian and other clog dancing going on in the car park. A very colourful and eccentric mix. 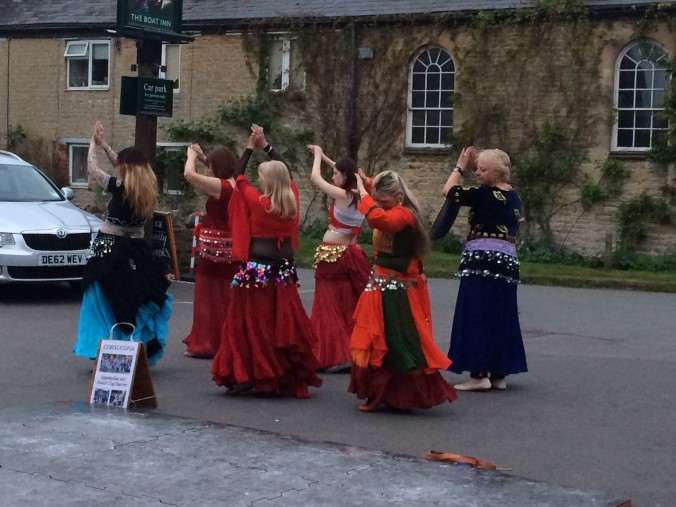 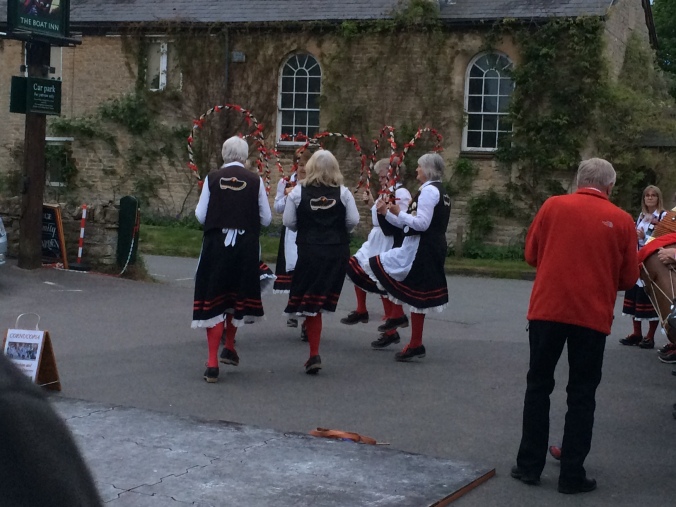 Down to Oxford the next day and dinner at the Jam Factory with Nettie, Dugald’s cousin.  We were now heading down the Thames and making some haste to get back to London.

The river locks are set to empty and fill more slowly when the lock keepers are not there. Culham lock takes about 30 minutes to fill on ‘self service’, and when we arrived it was empty. I set it to fill, and settled to read my book. A few minutes later a couple of local characters in steam launches they had built themselves arrived below the lock  and kept us entertained with stories while we were waiting.

As we entered the lock at Goring Dugald declared that this would be his choice of a place for a house on the Thames. Lovely but dream on.

We moored at Henley for a wholesome lunch and catch up with family friends Cleone and Frank. We had a very pleasant lunch and we were glad to see them. Two months later Dugald was at Frank’s funeral; but Frank and Cleone had been determined to continue to live life to the full even at the end.

We decided to accelerate our return because there was ‘lots to do’. On the stretch from Molesey Lock to Teddington we came across Barn Owl, a delightful varnished electric river boat, stranded with no power. 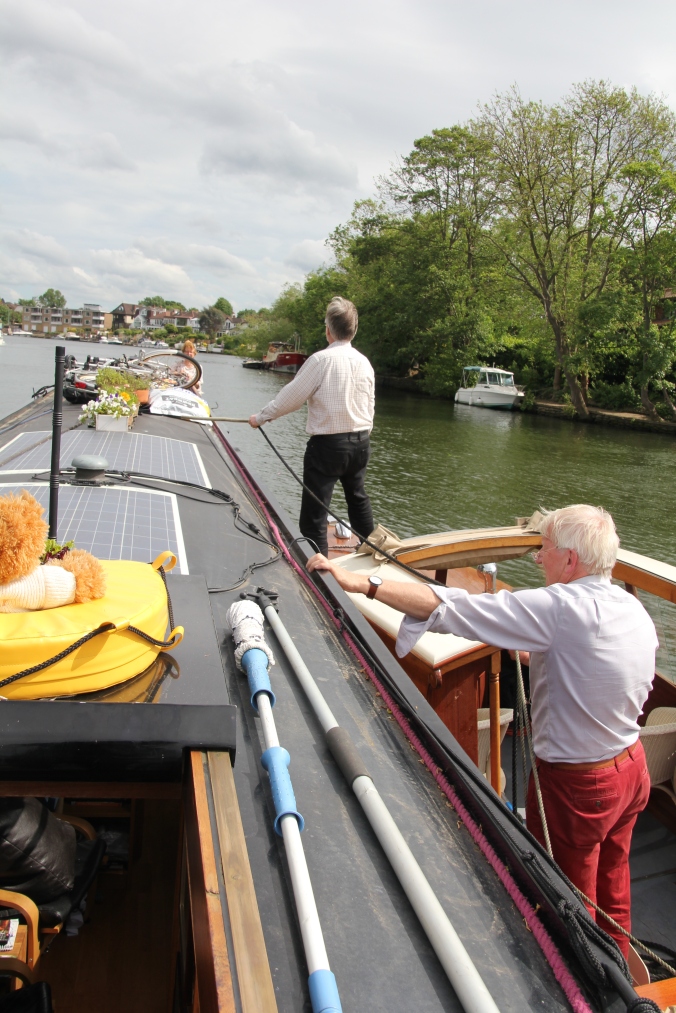 We took them alongside, worried that our steel sides would harm their tender wood, but managed to deliver them safely to the lock layby at Teddington. Barn Owl’s charming crew took us for a thank you drink at the Tide End. Both turned out to be eminent physicists so it was reassuring that they together could be confounded by the electrics of a small boat. 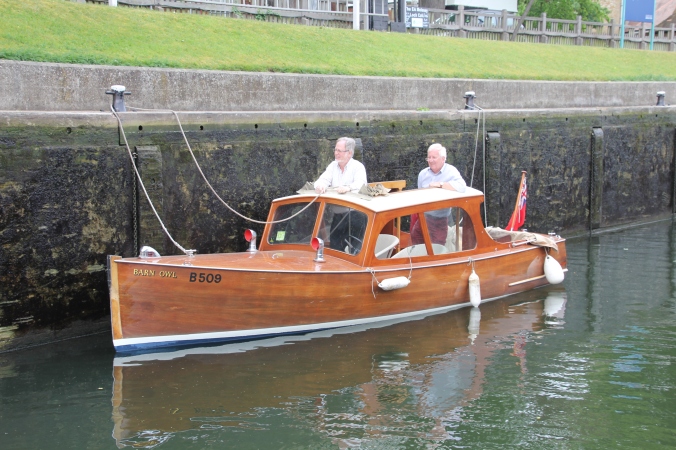 Early the next morning we left Teddington Lock in the company of an old tug-style boat, Firefly. She had a very old single cylinder Dutch diesel engine from about 1900. We set off at a smart speed on the tide with our engine at about 2000 rpm. Dugald was amazed and then impressed as Firefly sailed past us.

By 8am we were approaching the Thames Lock and we were back on our berth by 9. Shortly afterwards the heavens opened and it rained solidly for the rest of the day.

Our spring cruise had lasted nine weeks and we covered 660 miles and went through 314 locks. I felt it was a bit of a yomp, and have given notice that I am in charge of planning – or more accurately not planning – the cruises for 2018! Our next cruise down to Bristol for John and Mackenzie’s wedding will be more relaxed!