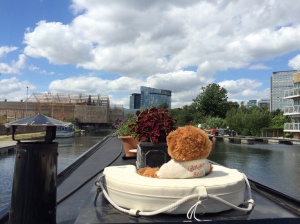 The lead up to this trip has been long. Dugald has been counting the days to his retirement from the Civil Service for months, and is looking forward to pastures new enthusiastically. I have been slightly more hesitant, I am not enthusiastic about stopping the work I have done for the last 40 years, but I am tired of working long hours, and need a break to get fitter. So is it just for 3 months, or for good? We had 3 days between leaving work, and leaving our mooring. They were filled with leaving parties, a university reunion, our 40th wedding anniversary and finally drinks at our mooring. It became clear to us the final ‘morning after the night before’, that keeping up that level of partying in your 60’s is much harder than in your 20’s. We planned to leave our mooring at 11am on the Tuesday morning, and eventually got away at 2pm having loaded fresh provisions, collected washing, lifted half our plant collection onto the roof along with our bikes and Ginger Bear. We took a deep breath, and set off up the Grand Union canal from Brentford (2 locks off the Thames) towards Uxbridge. Going up the canal rather than out onto the Thames always requires an extra draw on the energy tanks because you go almost immediately into the Hanwell flight of 8 locks. We arrived at Uxbridge at 8pm exhausted, 11 locks and 8 miles later. Quick supper and fell into bed.