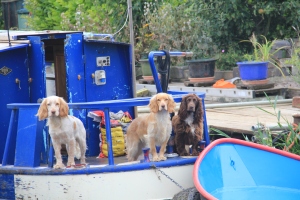 Retracing our way down the Great Ouse, across the Middle Level and back up the Nene we have balanced boating with time to stand and stare.

We watched a grebe family carry out an enchanting ceremony. The female carrying three young on her back was carefully passed a freshly caught fish by the male. This was passed back and forth several times (and waved at the chicks) before eventually being swallowed by the female. The camera was inside the boat and I didn’t dare move to get it. 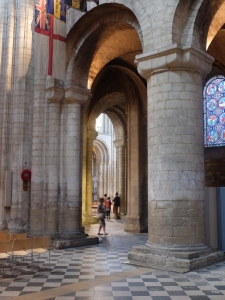 The tandem came off the roof and we cycled into Ely to admire the immense but accessible cathedral with its beautiful surrounding buildings. The cathedral can be seen for miles across the flat countryside and is the Ship of the Fens.

We moored near Upwell Church on the Middle Level. Wandering around its surprisingly intact and crowded old churchyard I was surprised by the number of 18th and 19th century gravestones recording deaths of people in their mid-80’s. This provoked a long debate between us.

Dugald and I used to debate by letter when I was at Dundee and he was at Bearley. A memorable debate involved the surface area/volume ratio of elephants and mice – those were the days! 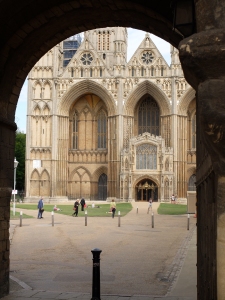 Back on the Nene, Peterborough cathedral is huge and central, but feels separate from the city with its gated close and cloisters. We wandered round, brushing up on some history, listening to a visiting choir practising for evensong. 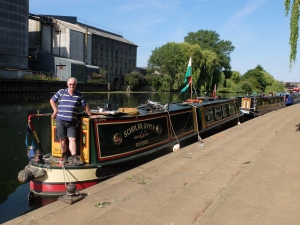 Dugald has often talked about a colleague, Simon Judge, who blogs about his narrowboat adventures on Scholar Gypsy. We had an unexpected encounter with Simon and his family in Peterborough while he waited to go into the Middle Level. They have been narrowboating for 35 years, and have a beautiful boat. Simon does not seem in danger of stopping and staring for long. He recently moved his boat to Ely, and has been testing the narrowboat limits by going out to sea on the Wash. The morning we met up with them, they had just come back into the river at Wisbech. The crew had been up since 4am, and the previous day they had beached the boat on the sand and climbed down ladders to play cricket on the beach. We had a very enjoyable hour with them exchanging yarns, but we have no plans to take Ginger Bear to sea.

Yesterday we motored up the Nene with increasing weather warnings of heavy rain and possible flooding. As we were travelling along I suddenly heard a hoot and saw smoke from a steam train. A couple of bends later we moored at Wansford Station by the Nene Valley Railway. We found ourselves in the middle of a Driver Experience Day. Lots of enthusiasts in boiler suits, having parted with a large sum of money, were discussing the nitty gritty of steam engines. Dugald was like a child in a sweet factory, excited to find engine yards, old steam trains and workshops restoring them, including the original Thomas the Tank Engine. We spent a long time discussing the restoration programme with a very enthusiastic volunteer before going off to watch some of the would-be train drivers going through their paces.

We had promised ourselves a short trip, but once we left the (very safe) Wansford mooring it took us another four hours to find a safe mooring for the evening at Fotheringhay, 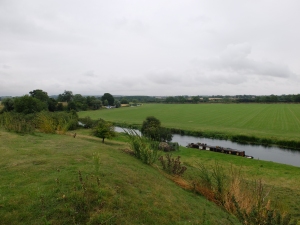 We moored below the remains of the Fotheringhay castle mound and moat. I found my favourite Fairport Convention song – Fotheringhay to play to Dugald.  It is about Mary Queen of Scots whose temporary burial place we had seen at Peterborough Cathedral, following her beheading at Fotheringhay Castle. Fotheringhay is also the birthplace of Richard III.

Few villages have such a claim on English history. In the evening we walked through this lovely place and into the Falcon Inn. We were warmly welcomed by Sally. She runs a pub that has been proclaimed Northamptonshire Eating Pub of the Year 2011, 2012, 2013, 2014 and 2015 – with good reason. We had an excellent meal for a very modest price accompanied by excellent customer service.

Today we decided to stay. We copied part of the map and planned a circular route of about 6 miles. Ignoring the rain we set off and sometime later realised that we had not only missed a turning, but gone off the map. Some adjustment via some very noisy piglets found us having a good pub lunch in an expected village. We eventually got back to the boat a bit later and 10,000 steps further than planned. Neither of us deserve our orienteering badges yet.

It is now Saturday morning, I failed to post the blog yesterday – no signal even on top of the mound. The sun is shining and we have spent the last three hours motoring up the river, through some more handraulic locks and have now found a lovely mooring WITH a signal. I will quickly post the blog before the signal disappears, then we are off to explore more footpaths and hopefully the delights of Oundle.

2 thoughts on “Time to stand and stare”