From the Staffs and Worcs canal we turned onto the Shropshire Union canal at Autherley Junction.

The Shroppie is a very pretty canal, 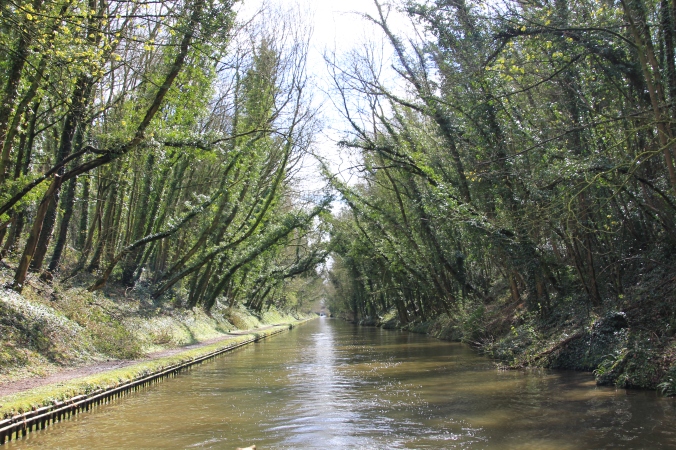 and almost immediately the bridges were much bigger!

The rain stopped, the sun shone for a bit, and then we had a sudden hail storm. Eventually the weather settled to cold drizzle as we arrived at Norbury for the night.

The following morning we set off along another deep cutting and came across a fuel barge halted by a fallen tree. There was quite a queue on the other side of the tree. Norbury Junction is a hire boat base, and a number of their boats were going to miss their 9am return slots. 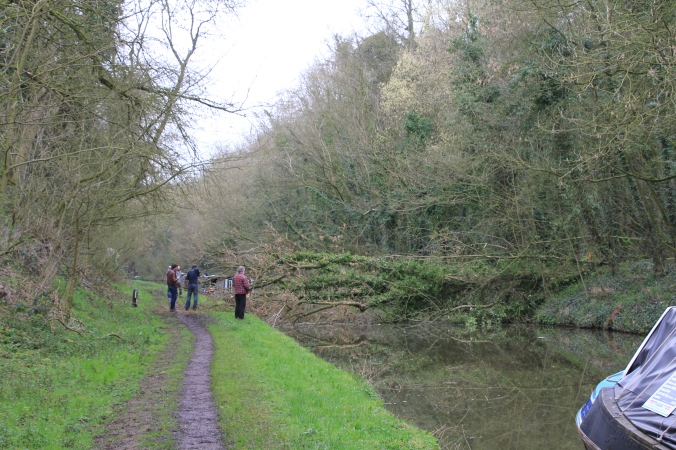 It was typical that the only firm arrangement we had made during the whole trip was to meet some friends at Market Drayton that afternoon!

Apparently contractors had been called out, but Dugald was impatient and full of ideas. He decided to start tackling the fallen tree with his trusty bow saw kneeling on the bow of our boat, helped by an enthusiast from one of the hire boats who had climbed along the tree. We had the first disagreement of the trip! With my H&S hat on, I suggested that the trunk was unstable, it might roll and land on our boat, squashing our home, and probably invalidating our insurance. I got off the boat, and the sawing continued. 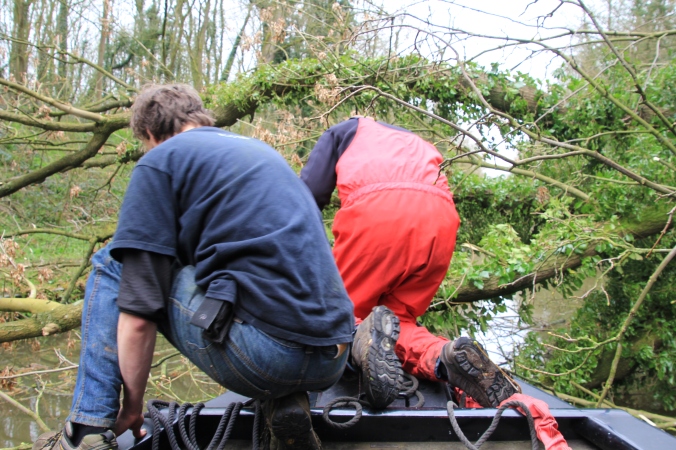 They did manage to create an archway, but there were some thick underwater limbs still preventing a boat from being pulled through, and it was going to take more than a bow saw to sort it out.

Fortunately Matt and Cath soon turned up with their trusty chainsaws, extendable saw poles, hooks and a dinghy.

After an unplanned stop of five hours we carried on to Market Drayton  and moored on the edge of an embankment where Ginger Bear was going to wait while we zoomed off to spend the weekend with our friends Frank and Lorna.

Deep cuttings and steep embankments are part of the signature of this canal. They caused Thomas Telford a lot of grief while he tried to engineer them, and some were not completed before he died.

We had a great weekend with them, and the sun shone. We walked up some steep Shropshire hills with stunning views,

and visited a flying museum at RAF Cosford. Frank and Dugald flew Chipmunks with the University Air Squadron when they were at Cambridge together. Lorna and I entertained ourselves with snippets of social history from the information boards around the planes, while Frank and Dugald were reliving their youth – with a very small plane.

We headed for two flights of locks. We were able to refuel at some of the Adderley locks. There were stalls by some locks selling eggs, sausages, cakes and biscuits.

On to the longer Audlem flight, we decided to pause for the night between lock 11 and 12 of the fifteen.

The following day we skirted Nantwich, and then turned left onto the Llangollen canal and the Hurleston flight.

A very cheerful lockkeeper helped us through.

We stopped for the night near a bridge and footpath so that we could have a walk and drop into a village pub for a quick drink before supper. The towpaths had been extremely muddy for some time, but the fields we were to cross looked pretty good. Looks can be deceptive, and we quickly found ourselves deep in mud and bog! Undeterred we trudged on, and managed to clean the mud off our boots by the time we reached the pub. Yet another pub to cross off our list. Almost empty, yet could not be bothered to say hello or serve us with a smile.

The next day felt like the first real day of spring. The sun shone, birds were chattering very noisily and the hedgerows were filling with leaves and blossom. We decided to try our new birdsong app. Knowing we were struggling to identify the birdsong, daughter Anna suggested an app which we had downloaded. The idea is great, you record the birdsong, and by some magic, the bird is identified along with its picture. However, I think it is designed with well behaved, occasional bird table visitors in mind rather than an unruly hedgeful. The result of our recording was a number of suggestions, but an overall request for fewer songs at a time, and preferably individual ones. We are still waiting for a moment when we have one bird calling.

We wound our way along this pretty canal lifting bridges, 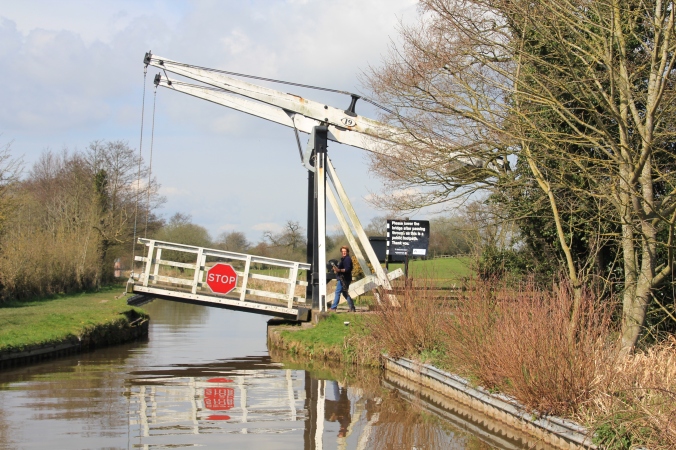 winding locks through ever changing countryside. We dipped briefly into Wales and then went through some strange peat bog areas around Whixall, similar to some of the fenland we saw last summer.

We stopped for a few days in Ellesmere, to practice our laundrette skills, replenish our supplies and take some exercise. We bought a map and planned a circular walk including part of the Shropshire Way.

It was a beautiful sunny day, we walked along well marked footpaths over green rolling hills with great views. Unfortunately the shiny green fields were waterlogged and we squelched our way from stile to stile – or diving boards as Dugald preferred to call them as each one seemed to have a large pond around it. It was Sunday afternoon, the sun was shining, and the only people we met over the 10 miles we walked were during the first and last half mile.

Dugald’s sister Kay and her husband George joined us on Monday, and we set off towards Llangollen. We spent the first night moored on the edge of the Montgomery canal, and walked down this peaceful canal for some time. The Frankton flight at the top of this canal is only open for a few hours a day, and we were not going to be able to explore it this time.

The next day the scenery started to change, glimpses of viaducts across valleys,

and we were welcomed to Wales at the entrance to Chirk tunnel.

Shortly afterwards we cross Telford’s famous Pontcysyllte Aqueduct. It is over 1000 feet long and 120 feet high in the middle. It is really just a water filled metal trough held up on pillars across the valley. There is a quite narrow walkway and rail on one side, sheer drop on the other. 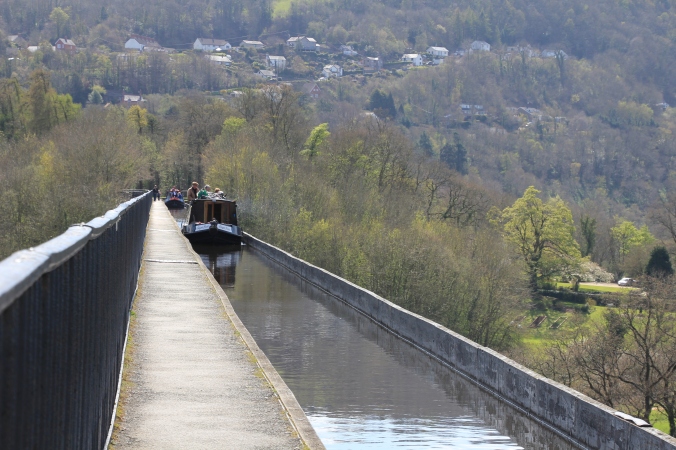 Amazing views of the valley and the River Dee below. This whole area is quite busy with walkers (Offa’s Dyke path runs through this area) and people just admiring the views.

There are no more locks before Llangollen, and the canal snakes through the edge of the valley in a spectacular fashion, still hugging the Dee.

The canal is very shallow and in some places one way for long stretches. Unusually there is a significant flow as it is fed from the Dee above Llangollen. This combination makes progress towards Llangollen quite slow, and it feels as if the boat is swimming through treacle at times.

There was plenty of space to moor in the basin above the town, but apparently it can become impossibly crowded in the height of summer. 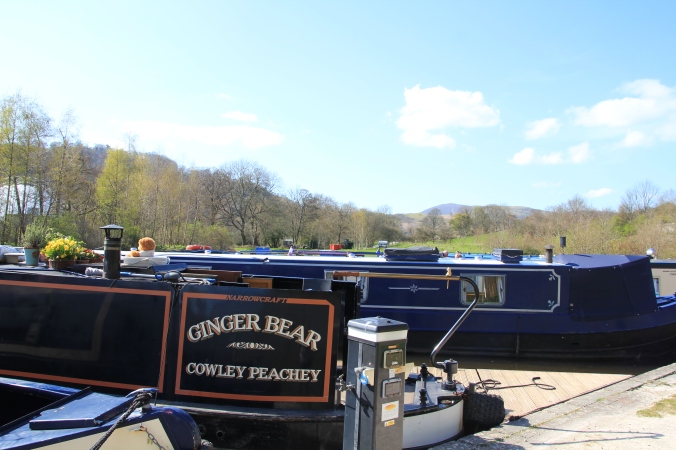 We walked towards the Horseshoe Falls where the canal begins, and then went for a meal in the town. George had booked us a table at the Corn Mill without realising that it was the site of the lunch 14 years ago that led to the ceramic mushrooms spree. We had a good meal and luckily it was dark and too late to look for mushrooms. 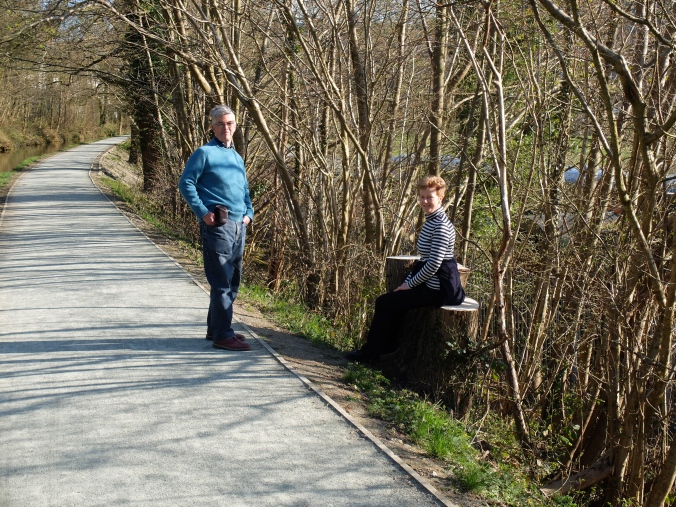 The next morning we found some fantastic pork pies and excellent local chicken from a long established cheery butcher, then worked our way back down the canal. 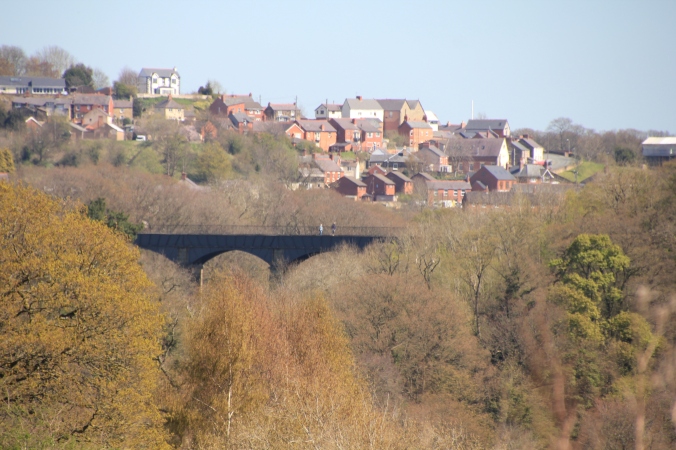 As the landscape became more pastoral we managed to find a lovely spot to moor in the evening with lambs to entertain us and much birdsong. 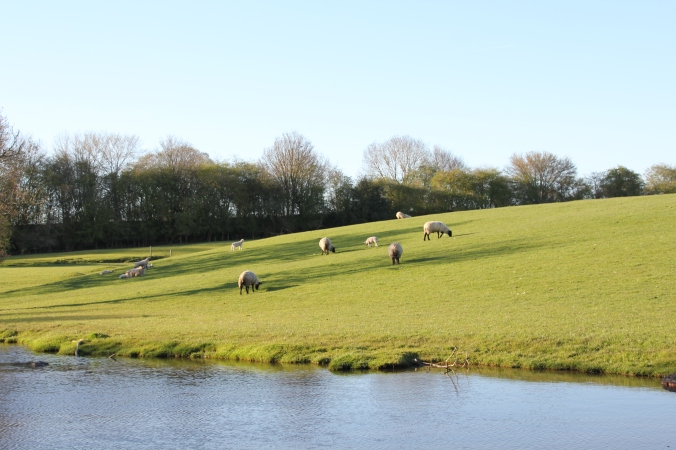 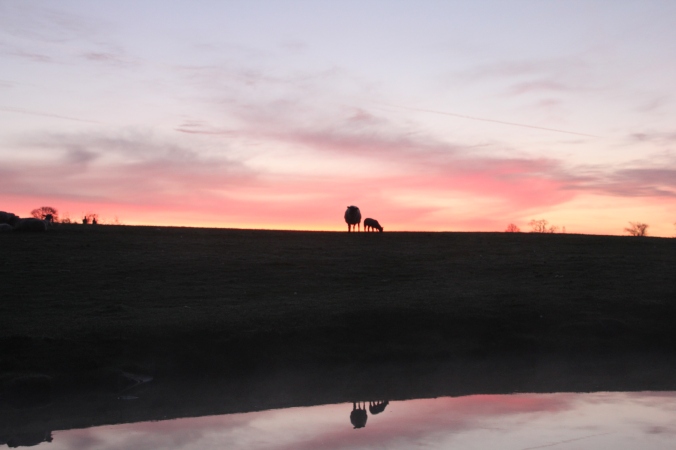 We dropped Kay and George off in Ellesmere the next day having really enjoyed their company, replenished our supplies, and then set off again retracing our steps. I realised that they had got off quite lightly, only four lock encounters in four days, not even one lift bridge.

The canal always looks different going the other way, so we are noticing new things as we head back towards the main part of the Shropshire Union, and the scenery changes daily, more leaves, cows now out in the fields, and very busy farm machinery entertaining Dugald.

As I write today, the sun has been shining, but a bitter wind is blowing, and we have seen some very new lambs with orange plastic jackets on to keep them warm. It was Saturday afternoon chaos as we came down the Hursleston flight of locks, no sign of the volunteer lockkeepers today. There wasn’t enough water between the locks, people were getting their boats stuck, tempers were frayed. Queues of boats waiting to go up the Llangollen. As we turned up the Shropshire Union we made a mental note to avoid the busy spots at weekends. We left Brentford exactly a month ago and have done 314 miles and 206 locks. We are now off to Chester.

Dave Straton suggested a map to make sense of the trip. It has stretched my skills, but here is my best effort. Actually it required Dugald’s best effort to get the blobs on!