From Hungerford we had about ten days to get to Caen Hill Marina where we were planning to leave Ginger Bear and go to Bath for John’s wedding. There was no need to rush so we had a very pleasant but wet circular walk to the South of Hungerford. We crossed the green common land of Hungerford Port Down and then circled round through some very lush estates where beautiful sleek suckler herds of Hereford crosses grazed alongside some very pampered outdoor pigs. We returned along the towpath and were struck by the density of the tufts of sedge grass that were deliberately planted to protect the banks. This was the same tough grass that plagued the river meadows at Bearley and gave Dugald fond memories.

We had an easy day to Great Bedwyn under a mainly grey sky. On the last lock two teenage girls were conspiring just like the heroines of Tamara Drew, one of Dugald’s favorite films.

We moored close to the town bridge, not far from where we had moored on a hire boat trip in 2001. Great Bedwyn is a pretty village. We decided to go up into the village and have a quick memorial drink in a pub where we had met Dugald’s mother for lunch all those years ago. Alas it had just turned into an interesting looking gallery, so we went a bit further up the hill to another attractive looking pub, but it was not yet open – plan foiled.

The next day we had planned a short trip to allow us to visit the Crofton Pump House where the beam engines still work. This plan went well except that it is closed on Wednesdays and it was Wednesday – so we’ll have to try on the way back.

We moored on the straight near the pumping station.

Here the GWR track runs very close to the canal.

The canal was completed in 1810 and the railway followed in 1841. By 1851 the GWR had bought the canal and although they were obliged to keep it open, ensured its decline by ignoring its maintenance.

Nearby there is another delightful Wiltshire village, Wilton, with a friendly pub, the Swan. It was a pretty half mile walk from the canal. 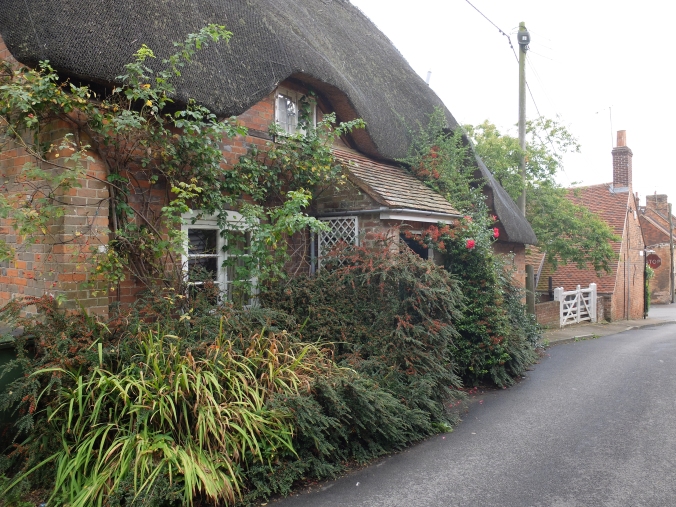 The Crofton Flight up to the summit of the Kennet and Avon had restricted opening hours to control the loss of water from the summit. So we made a half past six start to ensure we were in a good place when Lock 56 was unlocked at 10am. We got there just after 8am and were the first in the queue. We were soon joined by Provencale Rose. The lock was opened on time and we were on our way and soon through the Bruce Tunnel which was short high and dry – a nice change.

Now on the summit it would be downhill all the way to Bristol. We made good progress with Provencale Rose.

But at Heathey Close Lock we had a major dog poo alert which took some time to sort out. A lot of expletives about the thoughtful owners who leave it about. But they are angels compared with the man we met next.

On the lock I found a lock key and one open paddle. Looking below and into the distance there was no-one to be seen. I assumed a novice crew on a hire boat had left it, shut the paddle and started filling. Our companions thought they could find a home for the key. As we went into the now full lock a man arrived incandescent with rage that we had taken the lock he had in his mind booked from half a mile away by leaving his key – not to mention our companions appropriating the key! He ranted and raved, shouted and screamed. It was a genuine misunderstanding and I don’t think he had any prior right to the lock. I apologised and offered to help him through the lock, but  he carried on ranting. He made the mistake of calling me an ignorant Englishwoman, so I eventually used some of my Irish genes to match his! On reflection most people on the waterways behave with great courtesy, but he was an unusual and striking exception.

We left him behind and found a mooring at Pewsey just short of the wharf. On the following day Philip and Annie Mangnall arrived with their grandson Jun and their dog Ludo. We had an agreeable lunch at the Waterfront and then cruised slowly to the Barge Inn at Honeystreet. Jun enjoyed himself but Ludo was very unimpressed and squeaked in protest most of the way.

We cruised on very slowly getting to Horton Bridge the next day. It was a warm and sunny day as we walked up to the Wansdyke, an intriguing bank and ditch whose origin is still disputed.

Dugald was reminiscing about drilling oilseed rape in Home Field on August Bank Holiday Sunday in 1983 – not sure how or why he remembers this sort of thing. But we then came across someone doing the same thing – so lots of tales and admiring photos. 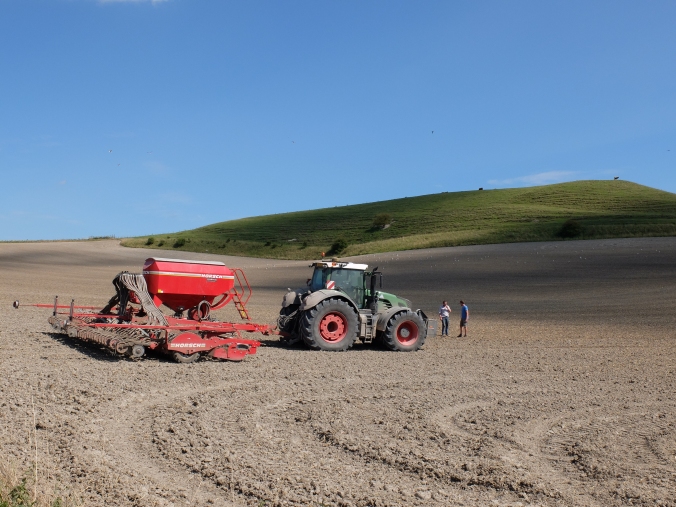 The next day was supposed to be the hottest Bank Holiday Monday since 1965 and it certainly felt like it. We made the short trip to Devizes and moored opposite the wharf.

We were waiting there for our daughter Claudia and 5 year old granddaughter Eliza. They arrived on the Tuesday and we set off to go down the beginning of the Caen Hill Flight with them. At first Eliza thought it might be fun to help with  with the locks.

The novelty soon wore off, and having brought her new bike with her, she was soon racing down the tow path, with Claudia in pursuit.

Stopping at the Black Horse at the top of the main flight we moored for the night and some supper.

On Wednesday the forecast looked dire – a lot heavy rain. Nevertheless we set off at 11.00 with our heavy weather gear on.

We were very lucky to team up with Michaela  and Peter on an Oxford hire boat “Bath”. They were great companions and we got into a good rhythm in the locks. 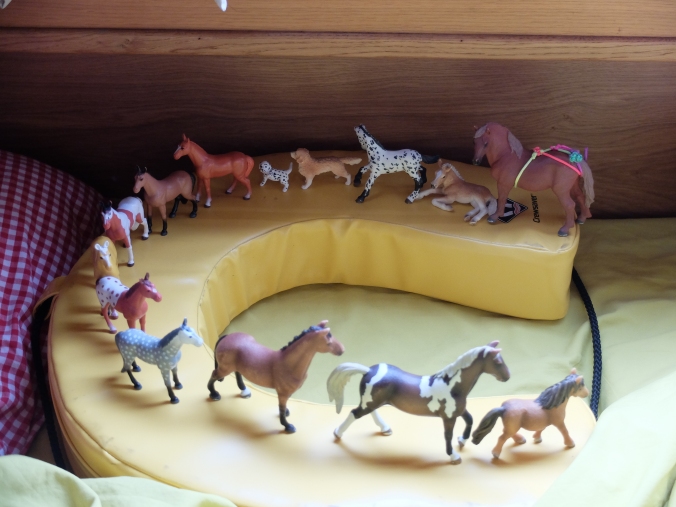 and in the cockpit with her lifejacket and whistle.

Peter and I decided to try driving into the locks together, a new trick for both of us, but it worked out pretty well.

We got through the main flight of 16 in just over two hours, but there were no moorings to be had below so together we went through the next six locks until we peeled off at Lower Foxhangers to moor. We said goodbye to Michaela and Peter.

As in the past a good partnership with another boat makes a lot of locks much easier with the bonus of meeting some nice people.

Eliza had another blast down the towpath before she and Claudia went back to Devizes by taxi and we settled down for a rest a few hundred yards from our destination Caen Hill marina.

One thought on “Down the flight”