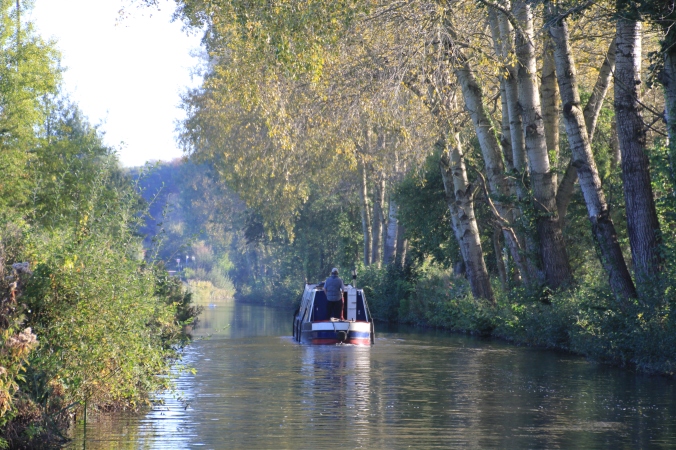 This is a restrospective – as before history rather than a current story. But just as narrowboats go about their business very slowly so too do their narrators. If you need speed the solution is a car + social media. If you can afford slower contemplation – here it is.

At the end of August 2017 Ginger Bear was settled in Caen Hill Marina to rest for the period of John and Mackenzie’s wedding. Alastair came to see us for dinner. He was in Brentford before being exiled to Devizes.

Monday was the start of a week of wedding celebrations that were frenetic, joyful and memorable.

We arrived back at the marina the following Monday exhausted and with a trailer load of rubbish, bamboo flares and other wedding paraphernalia. We got odd looks as we parked the trailer. Small wonder. The terms and conditions of the marina outlawed trailers. But we had not got a copy of the Ts and Cs. Serious error.

After a severe wigging from Sarah we recovered our trailer and completed our wedding tasks. We had a further discussion about the Ts and Cs before leaving prematurely in a very high wind the following day. Caen Hill is a great marina. We respect their rules, but make sure you ask for the Ts and Cs if you berth there.

On the way to Bath we stopped at Avoncliff, close to where I lived as a child, a beautiful spot with spectacular scenery. 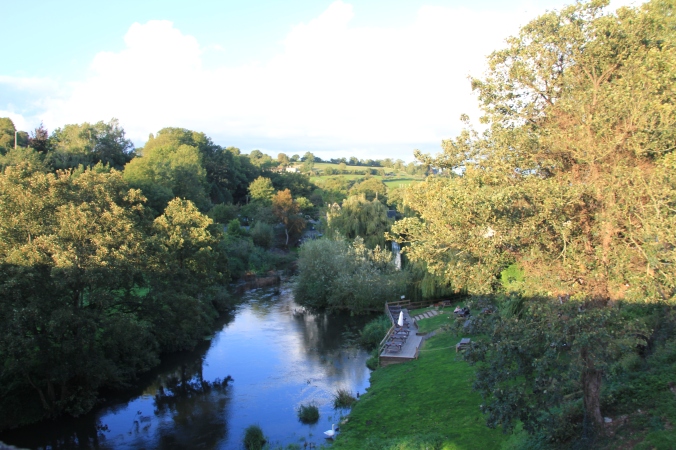 Passing some of the local fauna at very close quarters…. 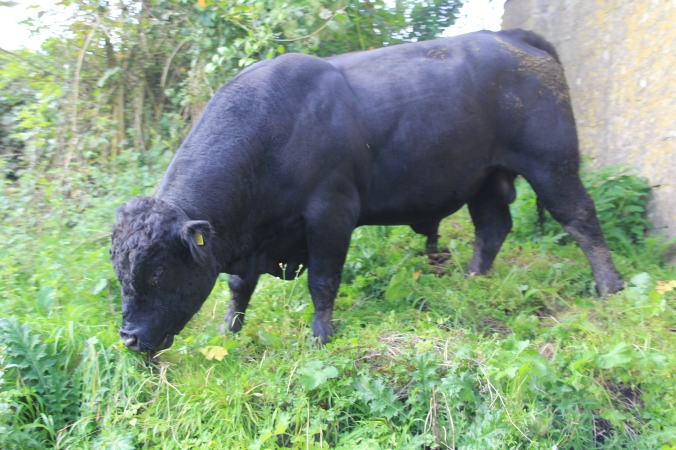 .. we were off to Bath where we moored in a good spot above the last locks into the Avon. 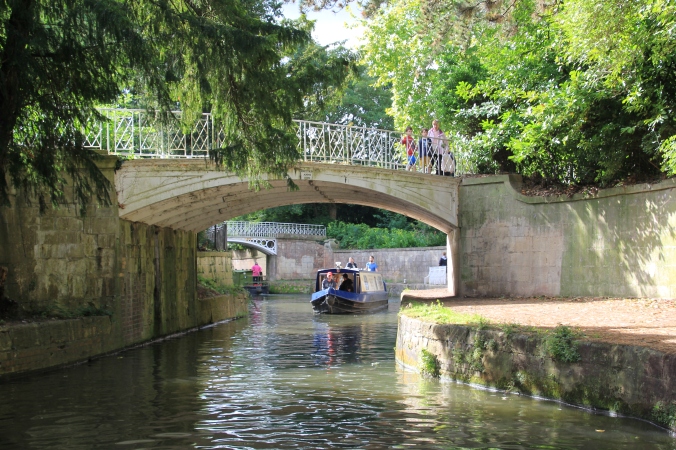 Then on 17 September we were back on a proper river after going through the 19’ deep lock on the way.

Ginger Bear was happy to be on a river again without the shallow water dragging her.

At Bitton Railway Bridge there was a large group of about 20 boats on a so called picnic spot. 4 or 5 deep they frustrated the efforts of conventional boaters to moor. There was quite a lot shouting going on as we wound through the traffic jam. 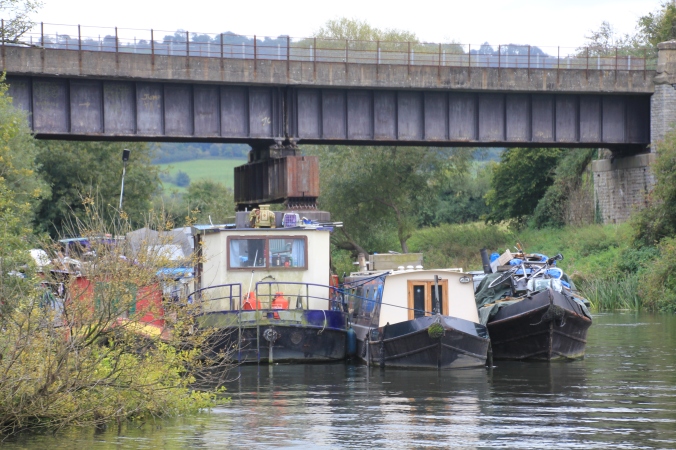 Leaving Hanham Lock we were soon in rowing territory with a lot of novice rowers and a great deal of starting and stopping. As in some other places the coaches have got used to the idea that they own the river and that other craft are verminous. A bit of mutual tolerance would be good.

By early afternoon we were turning into Netham Lock at the start of Bristol’s floating harbour. The lock keeper was helpful in giving guidance on the harbour and an hour later we were moored outside the Arnolfini in the city centre.

We enjoyed walking round the basin and then had a meal with John and Mackenzie. 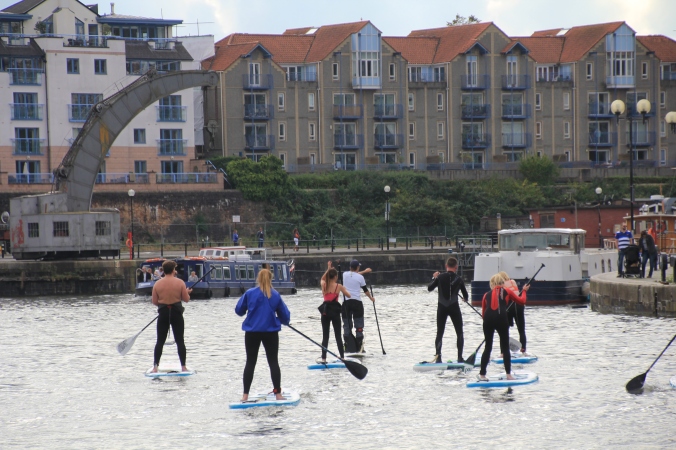 The next day we took a ferry to the SS Great Britain and spent a fascinating time there with John. It is wonderfully laid out and explained.

We looked at the replica propeller, the original being the first ocean going one. There is a wonderful sign advising that when leaving port the revs must not exceed 2rpm without the agreement of the pilot – caution indeed.

That evening we walked through the magnificent Queen Square on the way to a farewell drink with Sue, Mackenzie’s mother, before her return to Australia. John and Mackenzie live in Bristol and it’s a great city.

The next day we were on our way back. 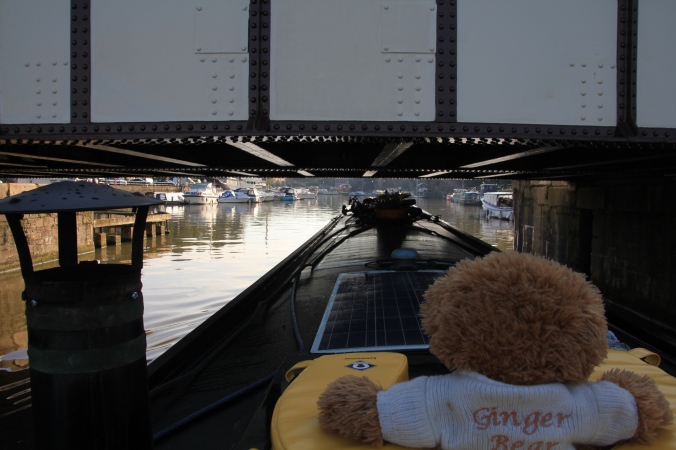 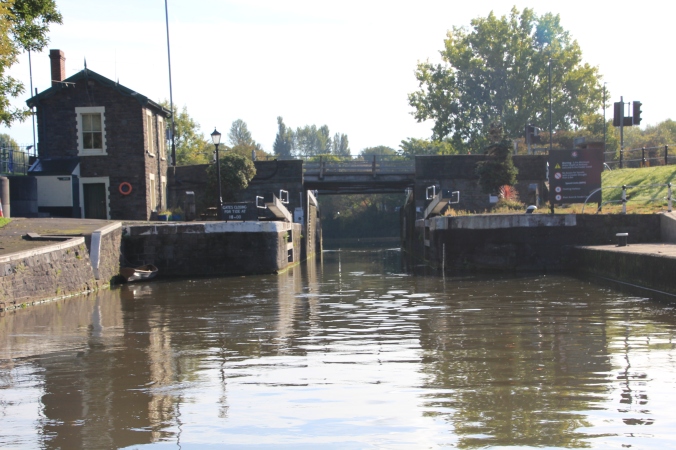 In the early afternoon we came up to Saltford Lock. On the lock standing there were lots of beautiful varnished skiffs similar to those at Dittons Skiff and Punting Club. The lock was open and the skiffers beckoned us in with enthusiasm. The problem was that the flow from the weir across the lock entrance is very strong and one mistake would reduce the skiffs to matchsticks.

Hard to make this clear, the more so as these skiffers were from Berlin, so the only answer was lots of speed to offset the weir flow and then a very rapid stop once we were in the lock. The Berlin skiffers smiled and waved and we were grateful we had done them no harm! By the evening we were back in Bath after an interesting passage through the deep lock. I was helming and the whole boat throbbed as the water came into this – the deepest lock we have been through.

From Bath we had a slow and easy trip back up the K and A with much shorter day trips than in the past.

At Hilperton the Boatyard gave great customer service from a family business. We stopped at Semington Bridge and Alastair and Gabi picked us up and swept us off for a welcome dinner in Devizes.

The next day we moved to pole position for the flight. On 22nd we set off at 7.00 in thick fog and a cold morning. 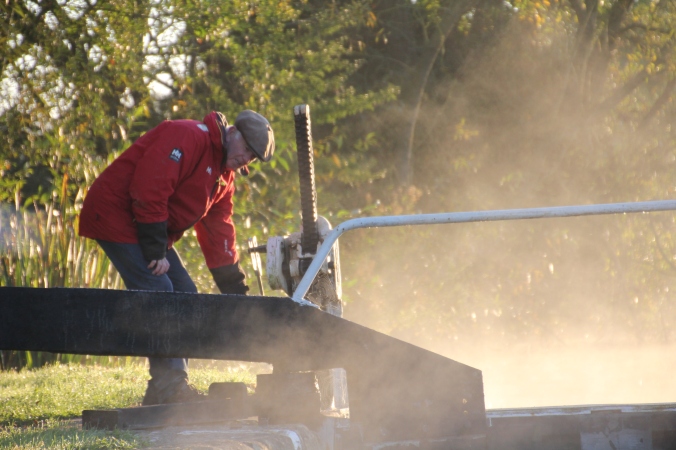 After a short coffee break we started up the main flight. We were blessed with a brilliant volunteer, Alan Gladman, who saw us all the way up the flight. 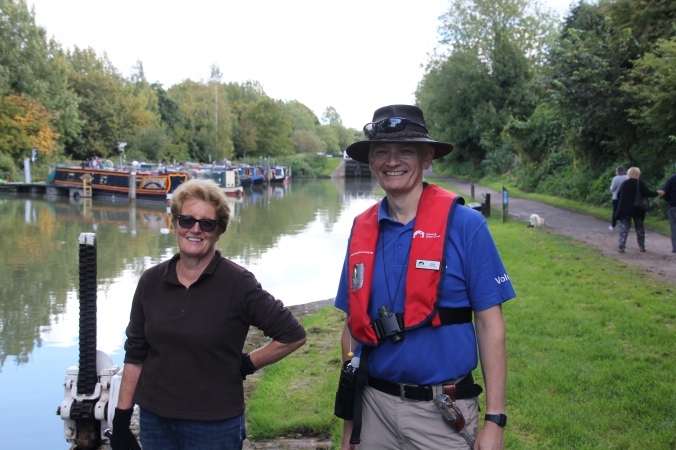 We headed slowly East. Our progress was punctuated by Dugald making trips back to London for school meetings. Fortunately the GWR is close to the canal for most of its length.

Julie and Mike joined us at Kintbury for a good lunch at the Dundas Arms.

We then set off behind the horse drawn trip boat and watched it winding very skilfully at Dreweat’s Lock.

The crew watched the placid Monty carefully because he is apparently prone to deciding enough is enough and setting off at a smart pace for home.  He reminded both of us of horses we had known in our youth.

Autumn was beginning and we still had not done lots of the painting we planned to do. As she headed East Ginger Bear began to look like a patchwork quilt. On 7th October we arrived in Reading in time to meet Joel and Ethan for a weekend sleepover while Anna and Ru went to a 40th. We tried winding in the Reading Gaol loop and just about got round before settling on the moorings of the Bel and the Dragon. Recommendation – go straight to the Bel and Dragon moorings. We had a memorable breakfast in front of an open fire, and lunch wasn’t long afterwards.

We managed to set off in spite of the lunch and moored at the Lynch just above Shiplake College. The island was explored with the boys as in Swallows and Amazons, but Ethan decided I had to carry him past the wasps’ nest in the large log across the path.

There was more exploration the following morning before we set off for Henley.

There was lots of space in Henley which is unusual.  The boys enjoyed the play area between the mooring and the town, especially the zip wire. After a while Dugald had become the referee/manager for an increasing number of children competing on the wire to register a record or personal best. A lot of fun that kept them going until their exhausted mother turned up to pick them up at 5.00 in the evening.

The next day we were on the way again, past the Llanthony which was still in the same spot on the bank. We moored below Brunel’s wonderful brick railway bridge opposite a large house in which a wake was clearly going on. Intimations of mortality.

A school meeting held up our departure from Maidenhead. Dugald reminisced about driving one of the umpire launches for the punting championships here at the beginning of August – strange what excites him. Then we were off to Windsor, Runnymede and Shepperton. There we were due to meet Sara and her inimitable children, Elena, Tom and Rosie. Once they were on board for a trip around Desborough Island the split of duties became clear. I was there to field the incredibly energetic children – where do they get it from? – while Dugald and Sara nattered non-stop about education, funding, universal credit and a host of other things. But we landed everyone safely and they all waved energetically as we set off again.

Then on to Sunbury to meet up with John and Mackenzie for a short trip to Kingston. Mackenzie had never experienced the boat in motion, but he passed the test pretty well. An agreeable dinner in Kingston celebrated John’s 33rd. Life is moving on: with our oldest being 40 and our youngest 33, time seems to be passing. But spending it on a cruising boat does not seem a bad answer.

15th October was the last day of our 2017 cruising, exactly seven months after we set off in March. As we went down to Teddington we passed a large gathering of Thames A raters preparing for a race. Timeless and elegant – and exhausting to crew. 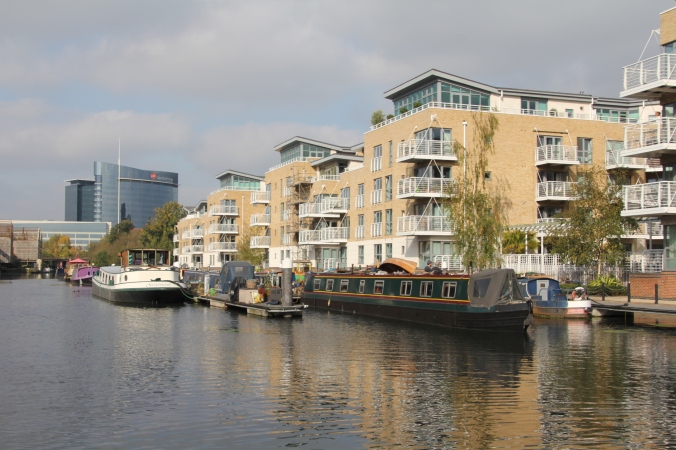 Another great cruising year in which we headed North and West and covered 950 miles and went through 570 locks. Next year it’s going to be more relaxed – I’m going to be in charge.